I used to use AirDrop A LOT to transfer comics between devices (iPhone, iPad, iPad Pro) and now I can’t do that? Panels no longer shows as number 1 on the list when I AirDrop.

Trying to make my bugs concise and searchable… hope this isn’t a bother.

This wasn’t on my radar. Will investigate.

I’m having this trouble. Is there a fix for this?

This issue should be fixed in 2.3.0. Please, let us know if it still persist.

Hi. I still seem to encounter this issue. I am on iPhone with iOS 14.3 and the app is fresh from the App Store at version 2.4.1.

When I drag new comic book file from computer to phone via AirDrop (cbr or cbz) on the iPhone I see an alert to pick the right app but there is no Panels app present there (I only see “App Store” / “Open in Files” / “Cancel”).

Thanx for your efforts.

Sorry about that. This is quite annoying and, unfortunately, quite hard to fix for everyone

Long story short: the lack of a global standard for CBR/CBZ file, plus the way iOS/MacOS associate apps with file extensions, makes it very hard for us to ensure that Panels appears in the list of compatible applications.

For each file format, iOS and MacOS use the file extension and something called UTI (Uniform Type Identifier), a “unique” identifier that the owner (creator) of the file format defines.
Given that CBR/CBZ are not standardized and there’s no official owner or organization defining the standard, every app defines their own UTI for these formats. iOS only allows 1 registered UTI per file extension. So, if you have more than one app that supports one of these formats, it might be replacing Panels in the registered apps list. Also, if you install one of these apps and then delete them, the UTI + extension registry breaks, unless another app is also registered to open those UTI. This means that users, can easily break their UTI registry just by installing a new app defining a new UTI.

File extensions that have an owner (like PDF) have a publicly standardized UTI that everyone uses. That’s why it less likely to see this bug happening with pdf files than CBR/CBZ.

Every time you open Panels, we try to find all the UTI registered on your device that Panels doesn’t support. And we add them to our supported list in the following releases. That minimises the chances of happening. We currently support 17 different UTI for CBR and another 17 for CBZ.
Hopefully, this issue should be fixed in upcoming releases. But unfortunately, it will probably resurface in the future. Because it’s not a bug in our app. It’s just that the standard (or lack of it) is completely broken.

Obviously, this is not unique to Panels. The folk that created Chunky Comic Reader wrote a great blog post about it. 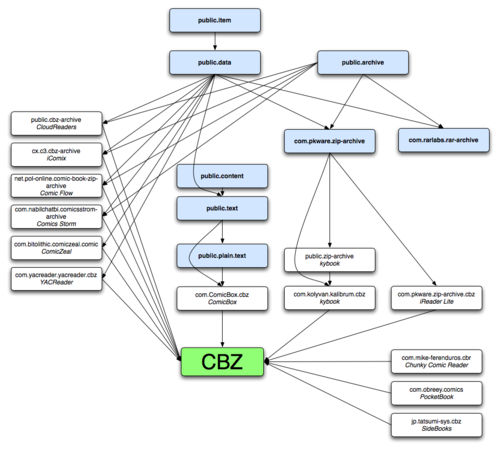 I got several instances of two different bug reports: 1. Valid comics are greyed out and non-selectable in the iCloud Drive browser 2. Chunky does not appear in the Open-In menu for CBZ files in other...

AirDrop is not working for me on iOS 14.4. AirDrop remains stuck in a “waiting” mode and never completes the drop. I am not complaining because I love Panels. Just trying to offer constructive feedback.